Revealing the truth of marriage dispensation: an analysis of child marriage practice in Tuban, Bogor and Mamuju Districts 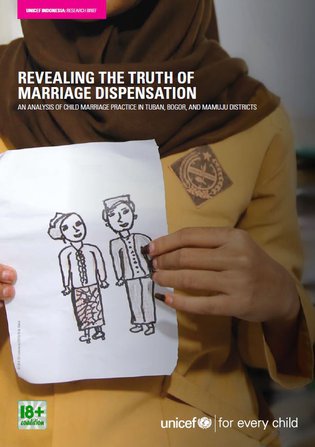 This research helps to understand the process of marriage dispensation in Tuban, Bogor, and Mamuju, Indonesia. Through this procedure, families can ask Religious Courts to allow marriage for people who are under the legal age of marriage.

The research reviewed 377 rulings issued by Religious Courts between 2013 and 2015. Most dispensation subjects were aged between 13 and 18 years and 55 % of dispensation requests were for girls. Of all requests reviewed for the study, 97.3 % were approved, thus allowing children to marry before the legal age.

The report calls for policy reforms to promote child rights and protect Indonesian children from practices such as marriage dispensation.