Born to be married: addressing early and forced marriage in Nyal, South Sudan 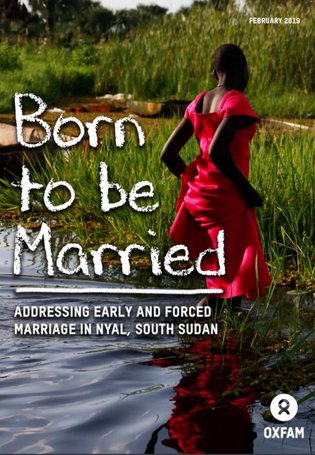 These findings are based on a survey carried out among about 200 women and girls, and on almost 30 interviews and focus groups with local decision makers and practitioners, and boys and girls between 13 and 18 years old.

Millions of people have been affected by the conflict that started in 2013 in South Sudan, and women and girls continue to suffer from rape and abduction for sexual slavery. Many people living in the most affected areas have fled to Nyal, a region still affected by increased poverty, food insecurity and sexual violence driven by the conflict.

While it is difficult to identify any increase in child marriage rates due to the conflict, because there was no data available on child marriage in Nyal before the conflict, the rates are alarming. With this report, Oxfam urges government, donors, and humanitarian actors to take action to address gender inequality and support community-based action to address this pressing issue.